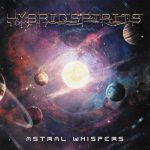 Whilst simultaneously working on several albums and genres of music, our first album “Astral Whispers” is now available.
Based upon 10 planets in our solar system, the contemporary and experimental album is an exciting exploration of space and sound. The music is based upon radio emissions from planets which were recorded during various NASA missions and subsequently released by NASA as audible sound waves.
On Astral Whispers, every music track is underpinned by the sound wave of its particular planet, and then musically explored. Using a variety of music and vocal themes, each track is as unique as each planet. The wonder and mystery of space can now be explored and enjoyed through an exciting and mesmerising journey. The album features a fusion of sounds from space, interweaving melodies and vocals which enables listeners to experience a journey into space from the comfort of planet Earth!
The idea evolved after Paul Kirk (composer and synths) heard the fascinating planetary sound waves released by NASA and was inspired initially to compose a piece of music for Jupiter. Fellow band members Nigel Rooke (sound engineer, lyrics, vocals and synths) and Voodoo Jade (Lyrics and Vocals) jumped at the chance to become involved, and a whole album soon followed.
We are fully aware that this is not a new concept. British Composer Gustav Holst wrote his suite “The Planets” in the early part of the 20th Century, and in more modern times there have been other people and musicians incorporating music with planetary sound waves. However, we believe that our individual and collaborative styles and experience have helped us to create an enjoyable 21st Century collection of celestial music which science and technology has made possible. Hybrid Spirits would like to thanks NASA for their permission to use their planetary sound waves in order to make this album possible, and to also thank them for their inspiration.

Shine, she wants to shine

Shine, she loves to shine, to light up the world with her radiance

See her smile as she lights up the sky, giving us warmth and giving us life

Bright, burning bright, from dawn to dusk in the golden light

Watch her move as she dances through the sky, we love to be with her

when she shimmers and shines….. She loves to shine

Come with me amongst the stars (English) x 2
Viens avec moi parmi les étoiles (French – Français)
I am planet number five, they call me Jupiter (English)

You were the first of the planets to be found

An ice giant that rotates on it’s side

You orbit the sun every 84 of our years

You rain diamonds yet you’re the dimmest of them all

You were the last of the planets to be named

(NEPTUNE) The Ocean In The Sky ©Hybrid Spirits 2018

In 1846 astronomers saw her surrounded by swirling seas

And upon such a beautiful discovery they fell upon their knees

And though she could not support life, they saw every reason why

They saw that arcs adorned her rings, made of gravitational dust

But we need her where she is, our ocean in the sky

An icy object in the sky, never seen with the naked eye

And beautiful shades of blue, which depend upon her mood

An ocean in outer space, with her atmospheric clouds

A dark vortex has appeared, which she wears just like a shroud

With atmospheres so cold, so dark, with supersonic winds

Her heart is made of rocks, her skin so very dense

Her clothes are made of molecules, she wears some dressing rings

And she wears her moons like accessories, her attire fit for a King

With colour so outstanding, a sight to truly behold

With Myth and lore and history, for she is 4 billion years old

And so…. many moons ago astronomers saw her surrounded by swirling seas

And upon that beautiful discovery they fell upon their knees

So that planet earth could wave to her, every 165 years, when she goes sailing by