Hybrid Spirits are a British band consisting of 3 kindred spirits whose fusion of music has created a fresh and exciting new sound. Our music is a fantastic example of what can happen when different people with different interests, ideas, tastes, experiences, backgrounds and influences work together. Our combined years of experience in writing, composing and recording music gives strength to the groundbreaking approach to music which we’ve taken. We are not afraid to write about the issues facing us (past, present and future!), and we enjoy having fun along the way. Our “style” of music can’t be pigeon-holed, and we are very proud of this, hence the very apt name ‘Hybrid Spirits’. Our individual and eclectic music tastes mean that you (or we!) never know what we’ll create next, and there is something for (almost!) everybody. It is our pleasure to share with you this exciting musical journey which we are creating.

We are currently working on several different projects whilst exploring different genres and themes. These will be launched as soon as possible. In the meantime, please feel free to download our FREE cover versions of songs which can be found under the MUSIC section of this website. Please keep checking back for news, updates and releases or follow us on Facebook and Twitter.

Enjoy browsing our site and music! 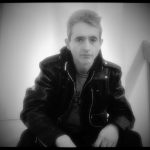 Nigel had his first Keyboard synthesiser at the age of 16, a Roland SH-101. He began experimenting writing songs with a friend in his front room. In 1991 he formed a band with Paul Kirk and gigged in and around Birmingham for several years before the band split and they all went their separate ways. Due to family commitments he took a break from music /bands but still continued to write lyrics. It wasn’t until he moved to West Yorkshire and closer to Paul that he got back into writing songs again. In 2013 they formed “From The Ashes UK”. They wrote a number of demo’s and were rehearsing ready to begin playing live again. But due to personal reasons, they were forced into another short break from writing songs and rehearsing. During this time they decided to stop writing as “From The Ashes UK” and form what is now “Hybrid Spirits” in 2017, bringing on board Voodoo Jade as vocalist and lyricist. He has a very varied taste in music, including Ska, Mod, Rock, New Romantic, Goth, Industrial and more. 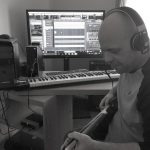 Paul started playing guitar at 17. In the early 90’s he started a band with Nigel Rooke and spent the next 7 years gigging around the West Midlands in various pubs and clubs. Fast forward to 2004 after a move to West Yorkshire and other personal upheavals, he re-established contact with Nigel and they formed what has become ‘Hybrid Spirits’. He has a varied taste in music ranging from classical to heavy rock. 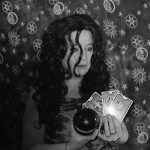 Voodoo Jade started studying music at the age of 8, playing the cello, guitar and piano. She was part of an award-winning school choir, where she learnt to develop vocals and harmonies. She joined her first band aged 15 as a cellist and backing singer, and has been involved in bands and music ever since. She has appeared in the press and has written, recorded and performed music at an international level under various names and guises. Having had a break from music between 2012-2017, she is now very excited to have joined Hybrid Spirits, and feels that her role is “to bring light to the darkness, with sprinkles of drama, humour and mischief!”. She is also a qualified psychotherapist with a deep interest in spirituality. Having trained as a medium and a healer, she hopes to apply her experience to forthcoming projects planned by Hybrid Spirits, as well as singing. She likes many kinds of music, including New Age, Goth, Rock, Techno and World Music.